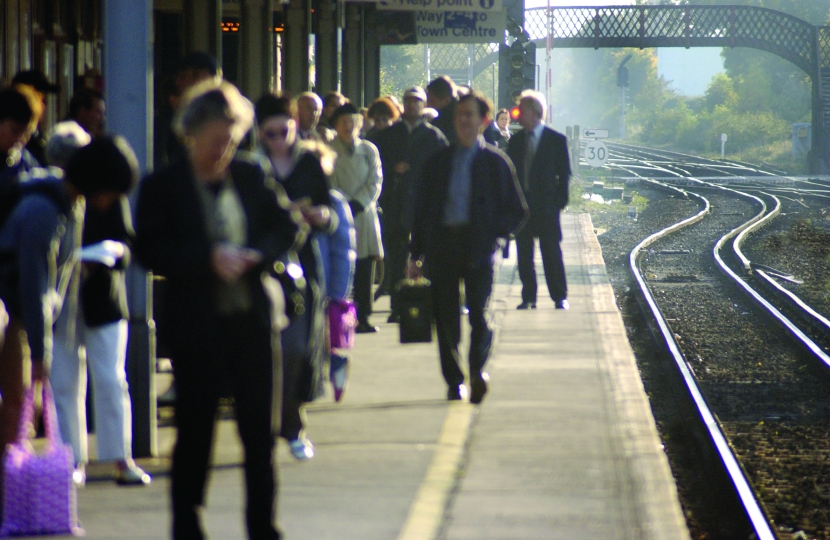 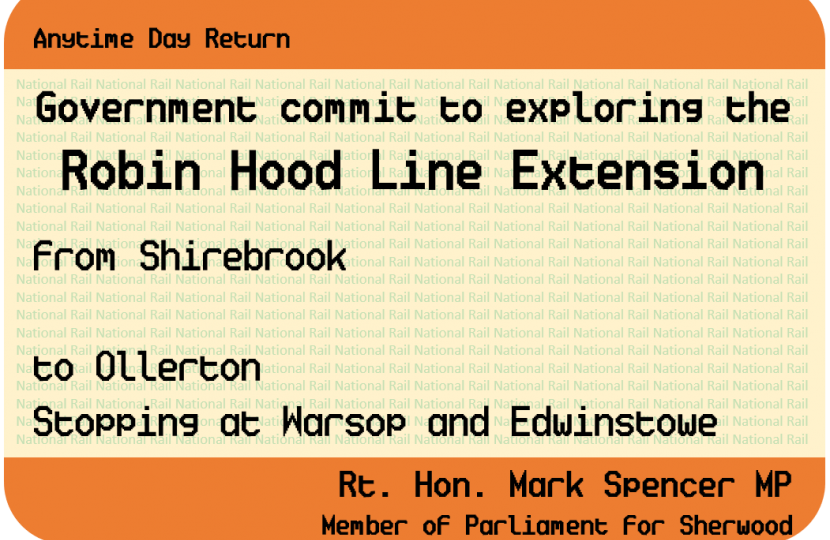 In plans released in today’s Integrated Rail Plan, the Government announced their commitment to the extension of the Robin Hood Line, and the construction of the Maid Marion Line.

Mr Spencer has been campaigning for the extension of the Robin Hood Line since his election as a Member of Parliament in 2010.

The Robin Hood Line Extension proposes that the line be extended between Shirebrook and Ollerton, bringing more investment to the region- boosting jobs and reducing emissions. The planned line will also stop at Edwinstowe.

During the 2019 General Election, the campaigning for the Robin Hood Line Extension formed part of Mr Spencer’s plan for Sherwood.

The Robin Hood Line Extension forms part of a Regional Connectivity Package for the Midlands that was announced this morning by the Transport Secretary, Grant Shapps.

Coming just days after the historic COP26 Glasgow Agreement was ratified, the Integrated Rail Plan will also seek to improve public transport use, and in turn reduce emissions by decongesting local roads.

The extension of the Robin Hood Line joins a slate of investment in North Nottinghamshire’s transport infrastructure, including improvements to the A614 and the investment in pothole repair technology the County Council.

“The Government is committing today to exploring the Robin Hood Line. This is genuinely fantastic news for North Nottinghamshire, the Midlands and Sherwood.

“I have always said that the extension of the Robin Hood Line will bring with it jobs and investments for Edwinstowe and Ollerton. North Nottinghamshire as a whole has a whole lot of untapped potential that is waiting for the investment.

“We have tourism, high skilled jobs and businesses and some most impressive levels of investment in our transport system. Frankly, there has never been a better time to live in North Nottinghamshire.

“With the Government exploring their options, this project will perfectly compliment the improvements to the A614 that I secured earlier in the year. These improvements are hopefully going to begin within the next 24 months- once the planning permission has been sought.

“For businesses and families in Ollerton and Edwinstowe, this is really amazing news, opening up opportunities across the County, and the whole of the Midlands.

“The fact that this has been announced as part of the Integrated Rail Plan really gets to the heart of what the Robin Hood Line has been all about- providing connectivity to rural areas and ensuring that businesses and families have the opportunity to reach out into Nottinghamshire, the Midlands and the United Kingdom.

“I look forward to working with Ben Bradley and Mark Fletcher, as well as my Ministerial colleagues to get this over the line.”

“It is great news that the Robin Hood and Maid Marion line are mentioned in the Integrated Rail Plan and we believe it will help plug a gap in the network linking Toton and wider Nottinghamshire together.

“We will now work with the councils, MPs, Network Rail and the government to push the scheme forward and integrate it within the network.”

Investing in our Local Infrastructure

As a largely rural constituency, in Sherwood infrastructure is integral for businesses and individuals alike. Whether that be your local bus service or your village hall, I will work to ensure that we all have facilities we need.

Since becoming a Member of Parliament, I have lobbied Ministers and local Authorities to support my plan to reopen the Robin Hood Line and extend it from Ollerton to Shirebrook. This move would provide great investment and support jobs in the area.

Delivering on our Manifesto Commitments

Along with all other MPs, Mark Spencer has been elected by the people of his constituency to represent their interests and concerns in the House of Commons.