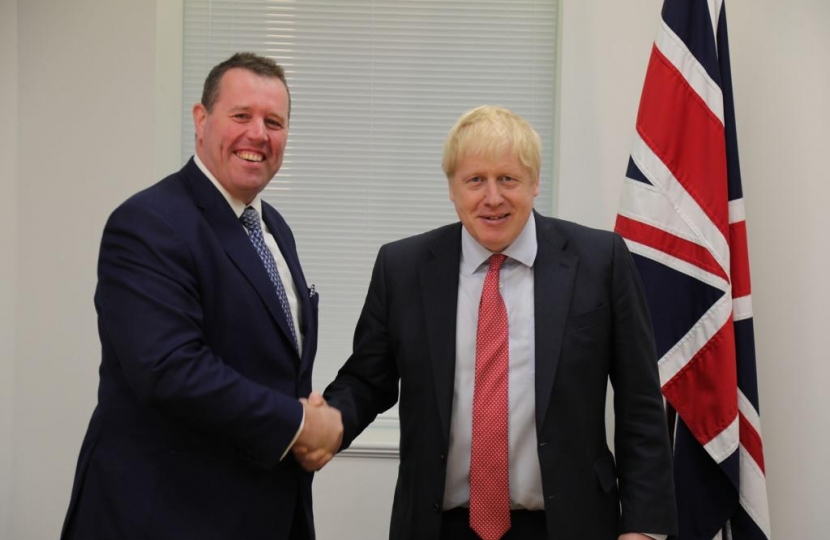 Mark Spencer was first elected as the Conservative Member of Parliament for Sherwood in 2010. Mark is also a local farmer and businessman. Mark's family have lived in Sherwood for four generations in Lambley- where he still lives today with his wife and two children.

Born in 1970, Mark went to Lambley Primary School then Colonel Frank Seely School in Calverton. He then studied at Shuttleworth Agricultural College in Bedfordshire, before joining the family farm business which now employs around 50 local people, growing produce which is sold in the farm shop.

Before entering Parliament, Mark was Chairman of the National Federation of Young Farmers’ Clubs as well as a District and County Councillor.

Since becoming a Member of Parliament, Mark has served on several committees including the Environment, Food and Rural Affairs Select Committee. In 2016, the then Prime Minister, Theresa May MP, appointed Mark to the Government Whips Office as an Assistant Government Whip. Mark also held various other posts in the Whips Office including Lord Commissioner of HM Treasury (2017-2018), Vice Chamberlain of HM Household (2018) and Comptroller of HM Household (2018-2019).

In July 2019, Prime Minister, Boris Johnson, appointed Mark to the Cabinet in the post of Government Chief Whip and Parliamentary Secretary to the Treasury. He served in this role until February 2022, when the Prime Minister appointed Mark, Leader of the House of Commons and Lord President of the Council. Mark still spends his time campaigning for Sherwood, and ensuring that his priorities for the local community are delivered.

I've been a local resident all my life, a local Councillor and I've always been involved in countless community groups and projects in the area that I love and call home. I'm passionate about Sherwood and if you have any problems or concerns I'm more than happy to help - just get in touch.