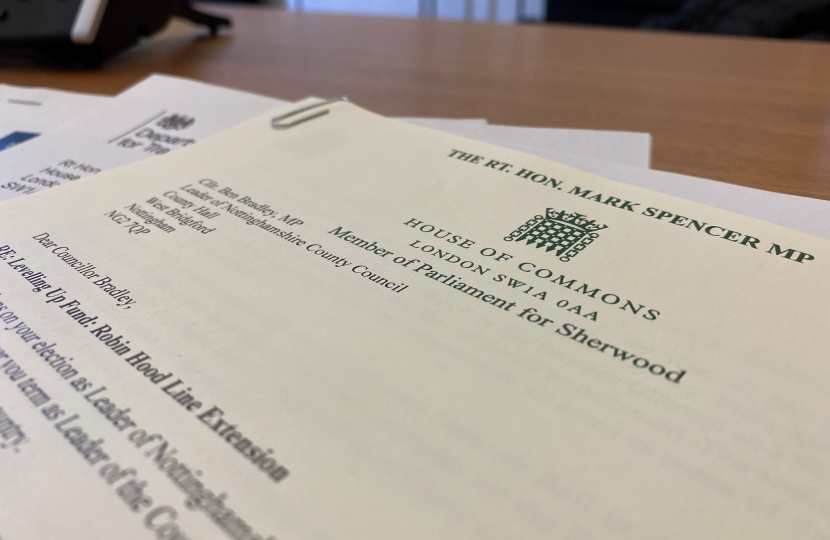 Mark Spencer, Member of Parliament for Sherwood, has written to the new Leader of Nottinghamshire County Council asking them to support a bid for Government funding for the Robin Hood Line Extension.

In the letter Mr Spencer and Mr Fletcher spoke of the benefits that the line would bring to the area, including greater access to surrounding areas and providing opportunities for investment in Ollerton and Edwinstowe.

“Extending the Robin Hood Line would improve connectivity across the North of Nottinghamshire. In towns like Ollerton and Edwinstowe, improved rail links will encourage businesses to invest here and create lasting jobs.

“Our High Streets have so much to offer, and the tourism sector in Edwinstowe includes world class facilities like the RSPB Sherwood Forest Visitors Centre. Improving access to our towns will give small businesses in the area the boost that they need to thrive even more.

“I have been working on this for many years. To finally get the Department and Network Rail to produce an estimate for the works is a big step in the right direction. Securing the support of the County Council is vital in demonstrating the schemes viability.

“I look forward to receiving the Leader of the Council’s response.”

Since becoming a Member of Parliament, I have lobbied Ministers and local Authorities to support my plan to reopen the Robin Hood Line and extend it from Ollerton to Shirebrook. This move would provide great investment and support jobs in the area.