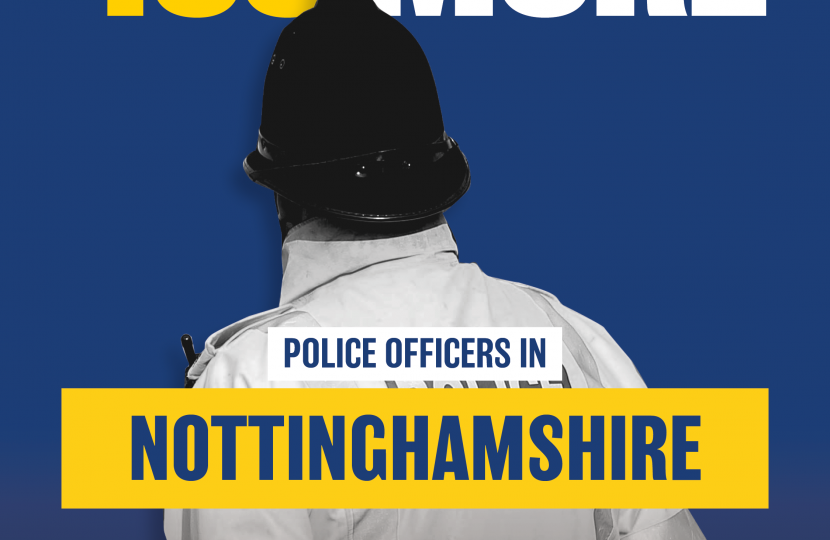 In the year since this pledge, nearly 6,000 extra Police Officers have been recruited across England and Wales.

For us here in Nottinghamshire, that means we have 100 more Police Officers.

British Police are the finest in the world, and the Government is committed to doing everything it can to support them. To do this, we're:

Boosting Police funding by £1.1 billion this year, including:

Increasing police pay by 2.5 per cent this year, ensuring policing remains an attractive career for everyone.

• This is the second consecutive year that police pay has risen by 2.5 per cent, which is equivalent to a constable receiving an extra £1,100.

Enshrining a new police covenant into law, enhancing support and protection for our frontline police officers.

•The initial focus of the covenant will be on physical protection, health and wellbeing, as well as support for families

Toughening up sentences for assaulting emergency workers, recognising the debt of gratitude the public feels towards them.

•The ability to double the maximum sentence for those convicted of assaults on frontline staff including police officers, firefighters and paramedics

Equipping over 8,000 more officers with Taser devices, ensuring they have the resources they need to keep themselves safe.

Cutting crime by 9 per cent over the last year, delivering on our promise to the British people to keep them safe.

Mark Spencer MP has welcomed the announcement that 203 police officers have been recruited in Nottinghamshire in the first year of Prime Minister Boris Johnson’s campaign to recruit 20,000 by March 2023, as part of the 8,771 additional officers that have been recruited across England and Wales.