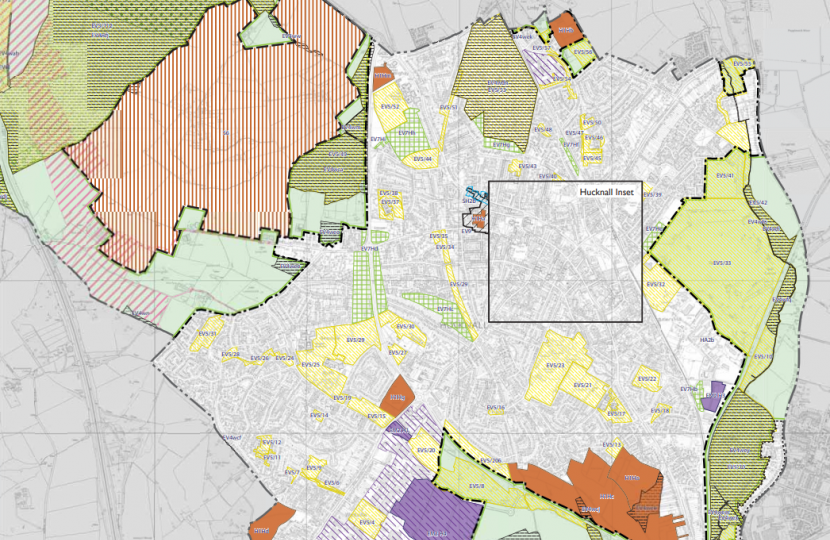 Mark Spencer, Member of Parliament for Sherwood has spoken out against the emerging Local Plan published by Ashfield District Council.

The Leader of the Council, Cllr. Jason Zadrozny has claimed in the media that Ashfield District council is required to build 8,226 homes in Ashfield over the next 18 years to satisfy Government targets. According to the Local Plan that has been published by Cllr. Zadrozny 4,898 homes will be built in Hucknall alone, with an incredible 84% of these being built on Greenfield Land.

Possibly the most controversial element of the local plan, is the planned settlement for 3000 homes on Whyburn Farm in Hucknall. The site is based purely on protected green belt land, and would see largest reduction in greenbelt coverage anywhere in Ashfield.

“We are going to see excessive development in Hucknall over the next 17 years if the Independent Party run Council are given the opportunity to pass their local plan.

“The Ashfield Independent Leader of the Council, Jason Zadrozny said that he’s not 100% happy with the proposals- this is frankly some kind of cruel joke. Why submit plans that you aren’t happy with. Even Jason knows that the plan is rubbish. Hucknall and Ashfield deserve better.

“The Ashfield District Council threw out the 2016 draft Local Plan saying that they could get a better deal for the whole of Ashfield. Why then has Hucknall’s housing allocation increased from 2,242 houses in the old local plan to 4898 houses in the Ashfield Independent’s Local Plan?

“It is no surprise however, that Jason Zadrozny has reduced his own area’s contribution towards the housing stock. Sutton and Kirkby have had their housing contribution reduced from 5,275 to 4,543.

“Under the Ashfield Independent run Council, we are seeing the destruction of our green spaces. 84% of all planned development in Hucknall will be built on greenfield land. Only 16% will be built on previously developed land. This is a travesty- and they are trying to cover it up.

“The Ashfield Independent run Council want to flood Hucknall with housing, yet they are cutting the services available to residents. We have seen the Ashfield Council Offices in Hucknall closed, and last year they closed a local leisure centre. I just can’t wrap my head around the logic of build nearly 5000 more houses in Hucknall, but consistently reduce what services residents can access.

Our green and natural environment is part of what makes Sherwood so special. From the Major Oak to Bestwood Country Park- Sherwood is built on its green foundations.