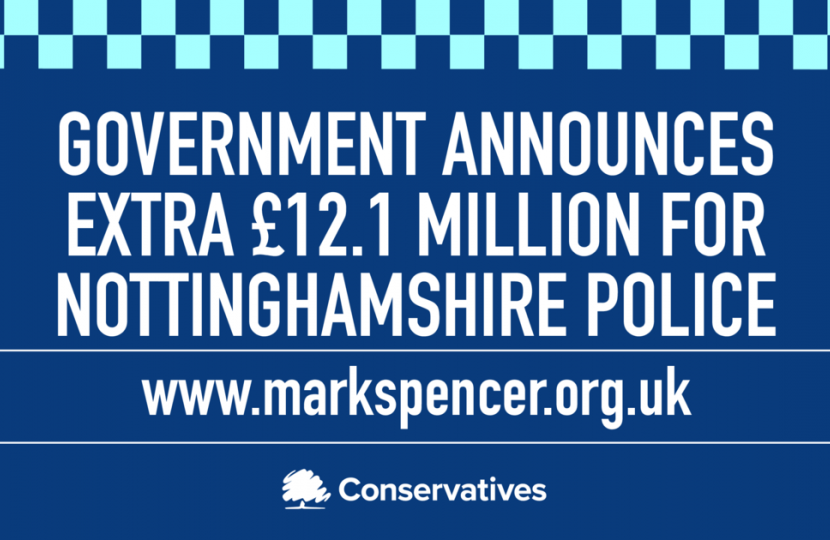 Mark Spencer, Member of Parliament for Sherwood, has today welcomed the announcement that Nottinghamshire Police will receive an extra £12.1 million in funding from the Government.

On Thursday 4th Feb, the Government announced the annual Police Funding Settlement for the 2021/22 Financial year which included £15.8 Billion of funding for the police system. An increase of £636 million last years settlement

For us here in Nottinghamshire, the extra £12.1 million represents a 5.4% increase in funding, taking the overall budget to £236.9 million, up from £224.8 million last financial year.

Mark Spencer, Member of Parliament for Sherwood said that:

“It is great to see the Government investing so heavily in our hard-working police force.

“Since Boris Johnson made his pledge to recruit 20,000 more Police Officers by 2023, we’ve already recruited over 6,000 more Police officers nationally, and for us here in Nottinghamshire we’ve got 132 new Officers for our towns and villages.

“Whether you live in Calverton, Hucknall, Blidworth, Edwinstowe, Ollerton - or anywhere in between - I am sure that we can agree that this extra funding will go a long way to delivering on the people’s priorities and making our local communities safer.

“By backing our police with the funding, powers and resources they need, we are keeping the public and our communities safe, so that people everywhere can live their lives free from the fear of crime.”

More locally for us here in Sherwood, I'm incredibly proud to say over 27,000 people have now received a dose of the vaccine